Today I attended my third city council meeting on the subject of horse-drawn carriages at the beach, and I spoke against them for the second time. It was a long meeting. It started at 6 o'clock and I didn't get home until 10. The council voted to allow the carriage rides, as I suspected they would, but the mayor, bless her, voted against it for the second time. The first meeting, a month ago, ended in a tied vote, which means the item is defeated. Then the council decided to reconsider the item, seemingly because it is so controversial. At the second meeting, last week, they decided to defer the vote, hence today's blockbuster. I wore my huge "no to horse-drawn carriage rides" sticker proudly. Apparently these meetings are replayed on a local TV station. I'm not going to bother finding out which one, for two reasons: I don't want to know if I made any dumb faces, and what could compare to the school board meetings on the Okemos Channel? Obviously, channel 26 cannot be beat in terms of public access television.

Lately, Jacob has been jumping the baby gate and waiting right next to the door so he can run outside when I get home. This is the second night in a row I have had to pull him out from under a parked car. Hello, the gate is there so you won't get out, beebeard. Why can't he be like Jasper, and run away when I open the door?

It's so late, Jason might be home in not too long. I guess attending city council meetings is a good way to pass the time between when I leave work and when he gets home.
Posted by Heidi Renée at 7:30 PM No comments: Links to this post

Merry Christmas to us. 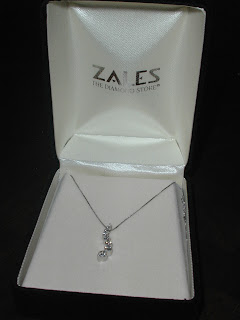 Santar (yes, Santar) came to my house early. When you're a big girl, he brings diamonds, apparently, because last year I got an engagement ring the first week of December, and this year, I got a necklace! I like early Santar visits.

In other happy news, Jason is getting out of the Navy in March and we're moving to Massachusetts! This means he won't go on the six-month (November 2007 to March 2008) cruise I'd been not-so-silently dreading. I love being a Navy wife, and I am endlessly proud of Jason for all he's accomplished as a sailor, but having him home with me is far more important than anywhere they could possibly send him and any accolade they could possibly give him.

As a result, we canceled the lease for the apartment we were going to move to, and I told my boss I'll be leaving. It will be interesting to see how they'll deal with replacing me.

Lest you think Jason got nothing for his stellar jewelry fetching, behold his ultimate reward: a cat-proof entertainment center and a TV wider than my backside--37 inches (the TV, not me). He swears he'll never want a bigger TV. Yeah, right. 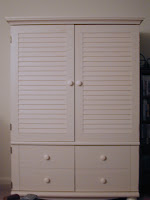 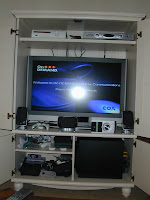 Today I attempted to cook my first solo Thanksgiving meal (I've been away from home for only two years, and my first two Thanksgivings as a pseudo-adult were conquered with family assistance), and I am happy to report that it was all delicious, all vegan, and mostly prepared sans drama. There was a pie casualty last night--Jason unwittingly turned off the timer and I couldn't tell if it needed more cooking, or was too cooked. I had botched the recipe to begin with, so having to start from scratch (which I did, ditching the pre-made crust and pie-in-a-can I had previously used) was a blessing in disguise. 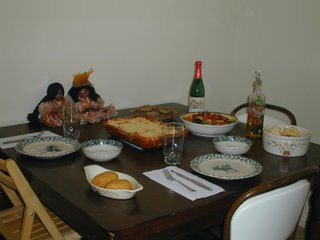 Our menu of vegan fare, pictured at right, was: a colorful baby greens salad with three kinds of bell pepper, grape tomatoes, cashews, almonds, baby portabello mushrooms, carrots, and sundried tomatoes; Bisquick biscuits; a lasagna with tofu "ricotta" and whole wheat noodles; and "turkey" roasts filled with cranberries and stuffing from Garden Protein (they're new and delicious--Jason said they tasted just as good as the real thing--and can be ordered by health food stores through Sysco if they don't have them in stock already). 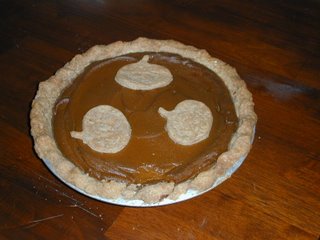 My aforementioned second pie was lovely to look at, although the crust was too salty for me (I blame the recipe). Jason loved the crust pumpkins I put on as the finishing touch. He likes the little things, my husband. We topped it off with Soy Delicious dairy-free vanilla ice cream and some sparkling mulled apple cider I bought at Mt. Vernon (George Washington's home) this summer. 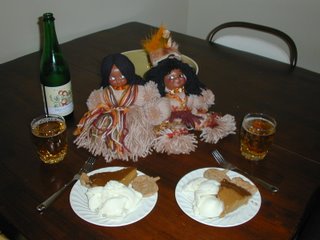 Joining us for our meal were my grandma's yarn Indians, whom I inherited (along with much of the cookware I used to prepare and serve the food) when she passed away about a year ago. I've been thinking about her a lot these past few days. I was horrified to discover a $1 price sticker on one of them--it appears they had once been destined for (or part of) a garage sale. I'm relieved that they were rescued (or that nobody wanted to buy them)--I treasure them, just as I do everything I have from her home.

I heard Jason futzing in the kitchen just now--he's hungry again, but instead of having more pie or lasagna, he's eating a leftover slice of pizza from Wednesday (when my work brought in pizza for lunch to thank everyone who drove through flood waters to get there). A Thanksgiving feast at his disposal, and he picks old pizza--classic man.

Tomorrow we are going to a Christmas Market with (and I quote from the advertisement) "300 artisans--Featuring quality fine arts & crafts, Christmas collectibles, handcrafted edibles, & thousands of home decorating ideas for the holidays." It won't have the nostalgic value of the Christmas craft sale my university always has at the Union, but I can't resist the possibility of finding some unique treasures (and laughing at people who try to sell silly things like yarn Indians--they're only special if they're inherited from someone as undeniably cool as my grandma).
Posted by Heidi Renée at 7:44 PM No comments: Links to this post

I suppose only time will tell.

It's been a long time. I've missed writing. I've written in my head countless times, but I never sat down to line up the words for others to read.

When my old journaling site closed, I felt like I'd lost my home, so to speak, and decided to take some time off from writing online. Losing Diary-X was hard; my history was there, and what I lost was irreplaceable. A lot has changed in my life since then, and I've felt for a while that I should make a fresh start of it.

I don't know what direction this online slice of my life will take. I suppose only time will tell.
Posted by Heidi Renée at 2:31 PM No comments: Links to this post