Having grown up Lutheran, it seems strange for Easters to go by without any sort of churchiness. Given that the day is about celebrating the resurrection of Christ, the orgies of candy and general "spoil the kids" attitude strikes me as a perversion of what the holiday is supposed to be about. Not that I ever go to church anymore. In fact, I've avoided it at Christian holidays for the past number of years because being at church reminded me that my grandmother (who died in 2005), the person in my family who enjoyed being there most, couldn't be there--she was too ill to go for a few years before she passed away. Although we went all the time when I was little, over the years our attendance dwindled to Christmas and Easter, when my extended family would fill up two pews or more at University Lutheran. Then, it was fun because the whole family was there. But my cousins grew up and had family traditions of their own, and people went their separate ways. When Grandma could no longer go, we all stopped going and would visit the nursing home instead. I was never particularly religious, going to church was just something we did. Now that I'm older, I don't particularly believe in "religion"... and the thought of going to church makes me want to cry. But still... making Easter into a candy holiday is ridiculous.

We spent the day at my sister-in-law's house, where the candy was flowing like Niagara Falls. They had two cakes and a cheesecake for dessert, plus the dessert that I was ordered to bring that had to serve 12 people (that I didn't find out about until Friday night). So, Saturday was baking day. Not to be outdone by those damn lazy and epitome of tackiness store-bought cakes, I made labor-intensive Linzer cookies--jam sandwiched between two cookies. As you can see from the picture, I was up until 3 in the morning (I started baking at 5 in the evening). But my cookies were vegan, damn good, and ridiculously cute--and also sugar-free so the diabetics could eat them, more than I can say for those nasty cakes. My sister-in-law said I am a Betty Crocker and she doesn't know how I do it. I did it because, despite the complete uncouthness of waiting until 36 hours before the event to invite someone and assign food to bring, I have standards and refuse to let people make me look bad simply due to lack of foresight. 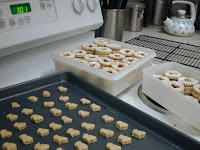 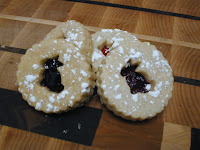 I saved the tiny rabbit cut-outs from the centers and baked those too, as you can see. My sister-in-law kept all of those to put in her kids' lunches. I was also assigned an hors d'oeuvre, so I made artichoke puffs (because that's what my mother-in-law requested) in two different sizes. Those took all morning on Sunday--remember, there had to be enough for twelve. Maybe it's a good thing church wasn't on the schedule.

Easter by the numbers:

That complaining done, however, it could have been a lot worse. Getting on well with the in-laws is always tricky, but this time everything worked out fine in the end.

Happy bunny day.
Posted by Heidi Renée at 8:20 AM 3 comments: Links to this post

Back in my high school/college days, I had a minor obsession with McDonald's Shamrock shakes. Then I went vegan, and I admit it, I missed those damn shakes. They were only available a short time each year, and then (a pox on my evolving ethics) I couldn't have them at all. It was a small sacrifice, in retrospect, and I soon learned to get my milkshake fixes in other, tastier, vegan ways--namely KB's Frozen Custard, the enlightened little ice cream shop that thought outside the cow. I've never had better non-dairy frozen treats. God, I miss living in Virginia.

Now that we live in the Dunkin' Donuts-studded wasteland that is Massachusetts, I have to take matters into my own hands. I searched the crannies of the Web for "vegan Shamrock shake," but found nothing. Seriously, vegans, has no one else thought of this before? Well, not to worry, minty salvation is here. I consulted this recipe for proportions, and let my culinary craftiness do the rest. So here's my vegan spin on my old staple o' March, as close as the nearest blender: 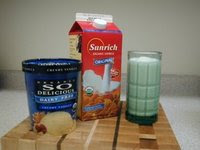 Combine all ingredients in the blender and blend to desired consistency. For thicker shakes, go heavy on the ice cream. For something you can drink through a normal-sized straw, ease up on the ice cream and use 2 cups of soy milk. If the ice cream clogs up your blender, add milk until it blends freely. If you want it to be the pale green color of McDonald's shakes, add a few drops of green food coloring (I just put mine in green glasses and my husband is none the wiser). Makes 20 ounces (2.5 cups).

Since I haven't had a Mickey D's Shamrock shake in several years, I wasn't sure how close my recipe came to the real thing. So, when my mom had one last weekend, I took one for the team and had a slurp (sorry, cows). To be honest, it was not nearly as good as I had remembered, and actually rather disgusting. It had this ambiguous flavor; minty, yes, but with something else mixed in, as if they'd swirled some chocolate and strawberry shake in there, too. Plus, there was more air in it than shake. Bleh. There are some dairy cheats that I can't resist very well (e.g., Cheesecake Factory cheesecake), but McDonald's shakes are now officially off that list.
Posted by Heidi Renée at 12:34 PM 3 comments: Links to this post

That's right, I got promoted and Jason has started with a new company. Next month I'm moving up to a more important position (designed just for me by my current and prospective bosses) in a different department at work and going back to full time instead of being a contractor. I'm thrilled! There will be more hours and more responsibilities, including some of a managerial/supervisory nature. Jason is equally excited about his upgrade, especially after his first day today--they gave him a whole bunch of fancy clothes with the company logo.

You've probably noticed the change of clothes on this page--I'm hoping that the new look around here will be the jolt I need to get back to writing regularly. I've bounced around a lot of ideas in my head, and now that I have a design I like, I feel ready to write.

Stay tuned for more in the next few days.
Posted by Heidi Renée at 8:42 PM 1 comment: Links to this post