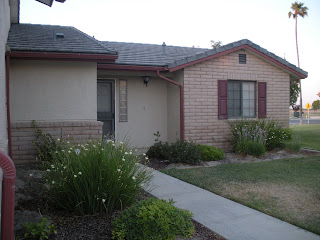 It's our house! Half of a duplex on the grounds of NAS Lemoore. See the palm tree in the background? Our new washer and dryer were delivered today, and the movers are coming to the fail apartment tomorrow morning to pre-pack. They'll be back on Monday to transfer everything.

I am very pleased with how everything looks. We have our own little fenced back yard and patio, a good-sized one car garage, a huge laundry/storage room, and another outdoor storage room off the patio. And... AND! We have a recycling bin with weekly pickup! The water doesn't taste like cows! We'll be able to keep all three cars in the garage/driveway! Jason's going to get a grill, and I'm going to plant some vegetables!

Should I make a Cribs episode like I did last time?

Some of my friends have already moved in: 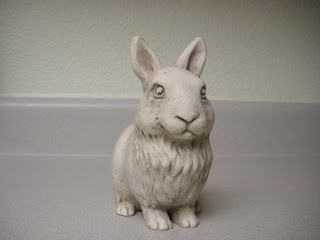 ...a washer and dryer, naturally!

You guys, it was so exciting. I've never owned my own washer and dryer before! No more nasty laundry room with pissed-in dryers! No more quarters! No more randomly missing articles of clothing! No more setting the timer so I remember when to go change loads!

They're being delivered on Friday. But not to the fail apartment, oh no. The delivery will be to our much-anticipated base housing unit! We get our keys Friday morning and the movers will be here on Monday to transfer everything. Just six more nights here, and then no more mattress on the floor, no more cow water, no more digging through boxes to find my belongings!

I really hope base housing doesn't suck. (We've never seen the inside of a unit.)

It will be the ultimate gated community--armed guards! Fighter jets! Parachutes! Giant anchors randomly set out on grassy knolls!

(It is the Navy, after all. There's always an anchor.)

I dare my mother-in-law to find her way to our door now.
Posted by Heidi Renée at 7:22 PM 6 comments: Links to this post

Don't worry, I snapped out of it.

Ok, so yesterday was not that much better than Thursday. The cats woke me up at 3:15 a.m. and I worked for 13 hours (on the same stupid thing I was working on Thursday)--so it was actually kind of worse. The only thing that made it not quite so bad was that there wasn't any diarrhea on the floor. Thank god it was Friday, because that at least gave me something to look forward to. Except that I ended up going to bed around 10:15 because I couldn't keep my eyes open. Thrilling!

This afternoon I went to the mall and got my hair cut again. I decided that the wedge cut I'd been trying so hard to have just doesn't work for my hair--I could never get the back to look good, no matter what I did. And getting my hair done is always a mood-lifter, which I definitely needed. The style I got is one that I go back to time and time again, copying Reese Witherspoon in Sweet Home Alabama (now I just need to get her body). 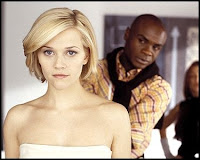 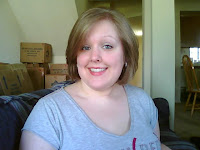 After my haircut I wheedled Jason into taking me to Starbucks, so that was another good thing.

The cats woke me up at 4 a.m., I worked for twelve hours on the most idiotic thing ever, and I had to clean up puddles of cat diarrhea and urine that were tracked all over the apartment.

I am filled with frustration and resentment from a variety of sources.

I spend so much time taking care of others. Giving, giving, giving. When is someone going to take care of me?

How was your day?
Posted by Heidi Renée at 7:35 PM 5 comments: Links to this post

All my bravado and decorating was for naught and my Red Wings lost the Stanley Cup. Boo, hiss, fail.

I've been consoling myself with foooooods. And crying myself to sleep (or not).

On Monday we had sushi at Toshiko (that was before things went downhill with the Wings, but whatever). I had seaweed salad, Agedashi tofu, an avocado roll, and a cucumber roll. I think I like seaweed more than I like desserts. I could eat seaweed every day. If we still lived near Minado, maybe I would. I hope there's all-you-can-eat seaweed in heaven.

The Wings lost game 6 on Tuesday. I have no idea what we had for dinner that day. I think I've blocked it from my mind due to the trauma.

On Wednesday I made Morningstar riblets, peas and carrots, and gnocchi and chickpeas with olive oil and garlic. 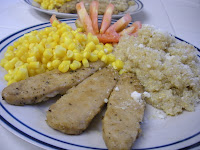 On Thursday I made Lightlife lemon pepper "chicken" strips, quinoa with Smart Balance and garlic (and parmesan cheese for Jason), tomato halves cut into flowers (I tried, anyway), and corn. I haven't done a cooking post in a while, I know. It's because I hate the kitchen in this poopy apartment. I'm hoping our kitchen in base housing will be a vast improvement.

On Friday I coerced Jason into bringing me home some Little Caesars pizza and Crazy Bread. The idea was to replicate the conditions under which I watched game 5. Superstitious? Yes. Delicious? Double yes. Too bad it didn't work. But I do still have half a pizza and a few slices of Crazy bread in the refrigerator, so there is that. If you've never had Little Caesars, you should try it. Their sauce is the best I have ever tasted. I can't even explain it.

The family that started Little Caesars also owns the Red Wings. I'm trying to keep my money in the family. The Ilitch family, that is.

Yesterday we busted out the Corvette and went on an adventure to Bakersfield so Jason could stake out some video game stores. Yeah, it was thrilling. But after that we got to have dinner. Jason, in typical man fashion, was all set to low-class it at Red Robin, but I was not going to let that happen. Instead, we consulted our friend the GPS and found the lovely Uricchio's Trattoria in downtown Bakersfield. I fail and didn't think to take any pictures, but it was a great atmosphere and the food was to die for. The drinks looked good, too, but we didn't spring for any this time. We did have dessert, though--Jason picked us out a piece of brownie cheesecake that they apparently bring in from a bakery in Beverly Hills. It was delicious--right up there with Cheesecake Factory. I had my leftover angel hair pomodoro for breakfast. Nom nom nom.

After that we came home and Jason played video games until 3:30 this morning. He's still sleeping now. I think it's time to go wake him up, yes?
Posted by Heidi Renée at 1:06 PM 6 comments: Links to this post

The other night Jason said something to me about Facey Spaces and I couldn't stop laughing. The next day my sister called me to sing me songs from The Lion King tell me about her job interview, and I asked her if she had seen this commercial (below) and if she thought it was as funny as I think it is. As you may have expected, we are two of a kind.

See also: my mom and 13-year-old cousin recently joined Facebook. Everyone has a Facey Space these days (although I did delete the MySpace pages Jason and I had a while back... MySpace is a pit of suck).

I have a feeling that posting this to my bliggity blog is exactly what Denis Leary and his aliens want me to do.
Posted by Heidi Renée at 11:46 AM 3 comments: Links to this post 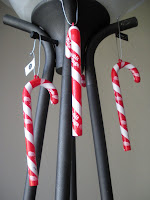 Today I had the honor of being featured on the English Fail Blog for the idiocy I found at the grocery store: behold.

Look, I even decorated.

And thanks to everyone who commented on my recent kiddie musings. It's comforting to know that those of you who have kids still enjoy life. There may be hope for me yet!
Posted by Heidi Renée at 6:21 PM 2 comments: Links to this post