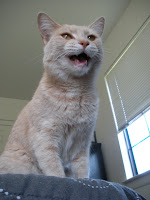 Monday afternoon brought the departure of the orange kitty, whose family had been out of town for the weekend, which is why they didn't call. It turns out that her name is actually Princess, not Bella. The base vet confused her with another cat that family has. I was sad, but I did what I could to compel the guy who came to get her to do a better job of keeping her inside. When I mentioned that she has been over here almost every day for two months, he just said, "Yeah, she gets out." YA THINK?

I took down their address and phone number so that the next time she comes to visit, I can take her back over there myself... but only after I spoil her rotten for a day or two.

Monday night Jason returned from his trip to Massachusetts. The tales of familial drama and strife with which he regaled me made me very glad that I stayed behind to guard the fort (and that we moved away from there).

But enough about that--I promised to post kitten videos from my work trip, so here they are:


Posted by Heidi Renée at 4:29 PM 3 comments: Links to this post

meanwhile, back at the ranch

As usual.
Posted by Heidi Renée at 11:20 PM 3 comments: Links to this post

she's making herself right at home

Yes, I'm listening to Glee music in the background.

Not a peep from her family yet. For now, she's mine.
Posted by Heidi Renée at 10:28 PM 3 comments: Links to this post

cat lady to the rescue 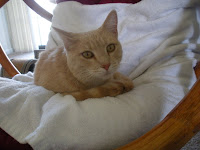 When I went to the kitchen to make my lunch this afternoon, I looked out the sliding door, and who should be napping in the back yard but the orange kitty. She doesn't always come around during the daytime, so I knew this was my chance. I scooped her into one of my ever-ready carriers (seriously, I keep one in the living room) and headed over to the base veterinary clinic to have her scanned for a microchip. It turns out that she does have a family here on base, but the vet tech couldn't get them on the phone.

We were in a bind. The clinic is closed on weekends so they couldn't keep her, and couldn't release the family's information to me to drop her off with them myself. Since her clinic records say she's fully vaccinated, I bit the bullet and brought her home with me (um, yeah, Jason is going to be so pleased). I had the clinic people call her family again to leave a message with my phone numbers so they can call me to come get her, but really, I'm not sure they will, since she appears to have been wandering around outside since the beginning of August, and has been eating here regularly since the end of September. She's sleeping in one of our living room chairs right now.

They tell me that her name is Bella. I think it suits her.
Posted by Heidi Renée at 7:04 PM 4 comments: Links to this post

...is what I said to Jason this morning, in a nutshell. He flew home to Massachusetts at the crack of dawn today, his 28th birthday, because his grandmother died earlier this week. She was 95.

I also told him I loved him, of course, but I said that like a millionty times and all those I love yous would not have made for a snappy title.

He hasn't seen his family since March, so it'll be good for him to have a few days with them.

(...I haven't seen my family since December, boo.)

All of the talk about loss and funerals lately has me thinking about my own heart-wrenching goodbyes: my grandma, who passed away October 8, 2005 (the day I moved in with Jason... but that didn't have anything to do with her death, I promise) and Velveteen, who would have been 10 years old this month. 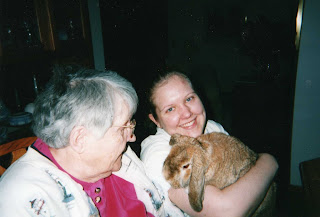 They were pals.
I will never stop missing them.
Posted by Heidi Renée at 5:03 PM 5 comments: Links to this post

What's that you say? Why haven't I told you all about my trip yet? Well, here goes.

After getting approximately .2340976 seconds of sleep Saturday night, I over-caffeinated myself to the point of nausea on Sunday morning, so having to watch a bald man seated in front of me on the plane picking at a bloody, oozing scab on his head was quite sub-optimal.

Despite that, I arrived in Virginia without incident and hailed a taxi to my hotel in a very professional manner. I smelled bad, was dressed like a college student, and I think I had lipstick smeared on my face, but the hailing--lo! the hailing!--was my very best imitation of a regular business traveler.

I spent Sunday night holed up in my hotel room feeling very sorry for myself for no particular reason. Monday morning I got a grip on myself, dressed up like A Person Who Does Business and took yet another taxi to the International Headquarters of the Organization for Which I Have Worked for Five Years.

I am so glad I took this trip. Being around colleagues / friends / compatriots / people who understand me was so refreshing, and training a group of people you'd need two hands to count made me realize that my job, while completely unglamorous and easily forgotten, is actually very important. I know things! Things that other people need to know! Things that are skills, even! 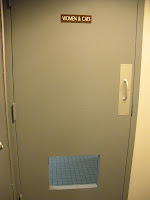 But more important than my "I matter" epiphany, I also got to see this. It's the ladies' room door on the floor where I was working. The grate at the bottom of the door is missing to allow the entry of smaller, furrier parties. And yes, there is a corresponding "men & cats" room down the hall. One must maintain a good sense of humor in my line of work, and having cats milling about does help. Sadly, there were not any wandering whiskers out and about during my visit, as they've all not-so-sadly gone home with people. 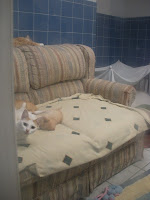 I did get to see some little darlings whom I would have smuggled home in a split second if I didn't think Jason would have immediately put me on a flight back to Virginia. I don't know their story, but whatever the case, they're definitely better off now. The mama kitty is the one peeking around the edge, and the pile of fluff next to her is made up of some of the orange and white kittens who dominated my tweets last week. I'll put up a video or two of them in another post, but suffice it to say that I may have spent more time finding reasons to leave my desk to go watch them than I spent doing actual work.

Yes, people, I get paid for this.

In between kitten-observing sessions, I managed to have dinner dates with coworkers three times, and go to an impromptu seven person pottery painting contest organized by one of my bosses. Could my job get any cooler? Probably not. I'll tell you later what I painted, but I will say that it necessitated me assuring everyone that I am not, in fact, an alcoholic. I don't know quite how our masterpieces will be distributed to us now that we've returned to our various corners of the country--we neglected to remember that none of us live in Virginia--but in my case I think it involves said boss coming to my house. Which would actually be pretty awesome.

I think I'll give you a kitten video now, because they are just that cute:

Posted by Heidi Renée at 8:51 PM 4 comments: Links to this post

my bags are packed, I'm ready to go

Tomorrow morning I'm jetting off to my former stomping grounds of Norfolk, Virginia. I'll be there until Friday for work. Although I've worked from home since early 2007, I need to go back to train some people on certain aspects of my job, so that everyone in my department has at least a basic understanding of my duties (in case I want to take a day off... or get eaten by Bunniculas).

It should be fun, if my trip to the Oakland office in July was any indication. I haven't seen my Norfolk work buddies in two and a half years, and I'll get to attend the all-staff meeting at a local movie theater (no, we don't get popcorn). At the very least, this trip is a chance to accrue some frequent flyer miles and hotel reward points on someone else's dime.

I probably won't be reading blogs or tweeting during business hours next week, but I'll try to check in at night.
Posted by Heidi Renée at 10:30 PM 2 comments: Links to this post

because I spend too much time sitting around in my underpants

A while back, my blogging friend Ashley had a contest on her awesome review blog. The prize? Gap jeans! Gap is the only place I buy pants. Seriously! I have a pair on right now!

Obviously I had to enter. Ashley's blog is pretty popular in the twenty-something blogging set, so I figured my chances of winning, unlike my thighs, were pretty slim. But wouldn't you know it, I won! My certificate for a free pair of jeans arrived last week and I may have jumped for joy a little bit at the mailbox. Don't anyone ever say that blogging never did anything for me, because it has now fueled my obsession with Gap (and my luuuuurve for my fellow bloggers).

As if I weren't envious enough of Ashley (and everyone else who got the hook up from Blog About Town) for getting to do such a sweet giveaway, she's also super crafty and has her own Etsy shop. Go check it out!

Thanks, Ashley!
Posted by Heidi Renée at 9:44 PM 4 comments: Links to this post